on animation in Zimbabwe 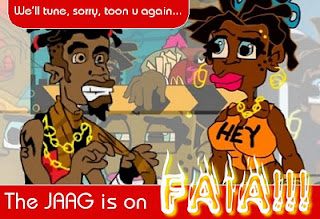 Whilst its not often that we get any news of the animation scene in Zimbabwe, there has been much activity including the Joint Afrikan Animation Group JAAG running various events including the Zimbabwe Festival of African Inspired Animation, ZIMFAIA. You can read all about this event and some budding artists work on the Global Press Article.
JAAG's 2010 conference was the first official meeting of Zimbabwean animators and VFX practitioners and there is an online document of the proceedings that can be found here.
Posted by Paula Callus at 12/15/2011 02:57:00 PM 2 comments:

The Black Heart Gang talk about their work

Courtesy of DesignIndaba here is great little clip with the BlackHeartGang from South Africa, talking about their work, this includes also their own animation "The Tale of How".

Bino and Fino air on Sky TV in the UK

Andrew Kaggia's animated short WAGEUZI will be released on the 2nd December. The short pre-release trailer looks like a kenyan-style cross between political sci-fi and the transformers...

Following their work on the TingaTinga Tales series, Homeboyz Animation Studio in Nairobi have released their most recent showreel of animated work... With some diverse styles and techniques its an exciting flavour of the Kenyan talent....

Another great animation from Kenya, as the first 'official' Shujaaz TV broadcast goes on YOUTUBE- put together by Just A Band's (and Shujaaz artist) Daniel Muli, Muchiri Njenga, Zoe Muthoga, Movin Were.
Posted by Paula Callus at 11/08/2011 08:06:00 PM No comments:

Well done to the animators who have been reviewed on AfriPOP's website. The article gives a short bio of each artist and links to their work. Read all about Kwame Noyongo, Adamu Wasiri, Mohammed Ghazala, Ree Treweek, Gatumia, Phil Cunnigham, Anthony Sliverstone at AfriPOP.
Posted by Paula Callus at 6/13/2011 12:32:00 PM 1 comment:

Described as an animated series of 20 episodes on the hisotry of Mali directed by Ismael Diallo and produced by InMedia, this body of work is another welcome addition to African animation. To read all about the production in more detail click on the article at Journal du Mali.

Inmedia is a corporation originally created in 1999 to address the gap in Multimedia in Mali.Since then great strides were made ​​in the area and many businesses and individuals with real expertise appeared. So after many changes Inmedia became an International Group with several partners and a network of international partners.Today it acts also as a marketing consultancy agent, specializing in developing communication tools, Radio, TV, web, animation and graphic design.

The Legend of Ngong Hills

Another great addition to the body of Kenyan animations, the animator Kwame Nyongo completes his charming animated short, The Legend of Ngong Hills.


"Based upon a Maasai folktale, 'The Legend of Ngong Hills' is the creation myth of these beautiful hills that backdrop present day Nairobi. Available in leading retail outlets across Kenya. See trailer on YouTUBE.
March 2011"

You can link to his website to read more about his other animations and work by clicking here
Kwame Nyongo
Posted by Paula Callus at 5/06/2011 12:38:00 AM No comments:

This beautiful painterly animation, based on Ethiopian folklore is another addition to the body of work by Ezra Wube. Here is a short excerpt - to watch the full 6 minute film go to IMDB or CLICK HERE

Following on from an Issue in African Writing - Geoff Ryman posts a supplemental addition to his article with a collection of images from different African Graphic Novels and links to various articles on the subject - definitely worth taking a look! Click to go to AFRICAN GRAPHIC NOVELS

An inspiring story about the start of "Teshai loves Learning", overcoming adversities and more Bruktawit talks about what drives her work....

Up and coming Ghanian animator's blog...

With some groovy pictures and great concept work... "Gyimah(pronounced:Jee-Ma) Litsitso Gariba.Second year Sheridan Animation student from Ghana living in Toronto" makes for a wonderful addition to the body of work inspired and made by African animators.... 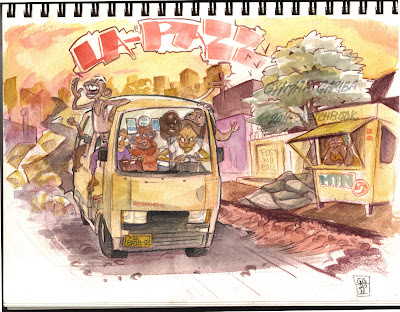 a great Kenyan find... from political to humourous 3D animation

In 2009 - the A3 Genesis Event screened a program of animations that were both local to Kenya and other African countries. Hot off the press, this was the first time political animation "The Greedy Lords of the Jungle" was screened locally(British Council) to a local audience. It later screened at the Durban FIlm Festival in 2009. It resonanted on many levels not least because it followed the still very recent post election violence. A recent search for this animation led to the discovery of what now appears to be a company based in Nairobi, RECON Digital, working on other 3D Computer Generated animations. The new "Domestic Disturbance" is a great addition to their portfolio...

With recent events unfolding across Eygpt and Tunisia
animation has found its place amongst the political voices...

can now be found on their very own website with stuff for sale, episodes to watch and more related info.
Posted by Paula Callus at 2/04/2011 01:59:00 PM No comments:


whilst its not clear whether an animator by profession the enviromentalist Jerome Kimaru's productions are a great addition to evidence of Tanzanian animation
Posted by Paula Callus at 2/01/2011 02:32:00 PM 2 comments: 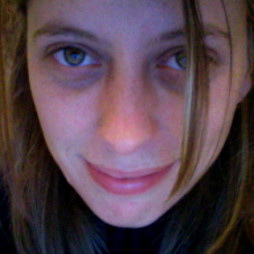 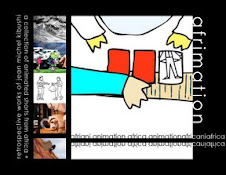